West coast legend Arthur Erickson passed away today in Vancouver. I don’t know if I’ll ever be able to put into words what it was like to spend time with him, but I do know he will be missed by many and his work will live on. We had the privilege of meeting Arthur earlier this year. The night started with countless rounds of Japanese Robata and Sake ending in a magical tour of his garden. It’s like the man was operating on a higher level yet he was so connected to what was happening at that moment. Thank you for everything you’ve done for the West Coast and Canada.

Los Angeles based architect Barbara Bestor is getting mad press this month. Featured in Elle, Angeleno Magazine and Brutus (Japan). Her Venice House is featured on a Dwell Magazine walking tour this weekend. If you’re in LA, do check it out.

Another gem from North Vancouver legend Fred T. Hollingsworth. Featured in Fred’s book the Neoteric House truly wowed us as we stepped inside. The amount of natural light inside was astounding and so were the original blueprints! Putting the ‘proper’ in British Properties.

West Coast legend and all round awesome guy, Barry Downs opens his studio to the CoMo cameras. What a day, the man is an artist and an incredible architect. He’s working on a modernist gem up in Uclulet that had us spinning. Some pics to give you a taste.

Mike and I spent Saturday afternoon with the man they call Abraham. What a guy, a delight and a laugh. So knowledgeable and on point. He cleared up a lot of clouds that we had in our story and has really given the project a kick. Talk about an art collection! A Corbu relief on the kitchen wall and Claude Tousignant were just the tip of the ice berg. Very excited to watch and log over 3 hours of Abe. We’ll be working with Mr. Rogatnick this year as the project moves forward.

John Entenza’s original 850 square foot home designed by Harwell H. Harris in 1937 in Santa Monica. What a beautiful little house. The alcove in the car port used to have an outdoor shower where Entenza would shower after a dip in the cool Pacific. Entenza would walk up from the beach, shower off and continue into the house—Talk about indoor outdoor living. This house is also the birthplace of the much respected Case Study Program engineered by John Entenza in 1945. Architect Michael Folonis featured in our film who restored the house, spoke with Lucia Eames at length about Entenza and Charles & Ray Eames sitting on the floor of this house hatching the Case Study House program through his magazine in the early 1940s. These guys were truly living large in 850 square feet. 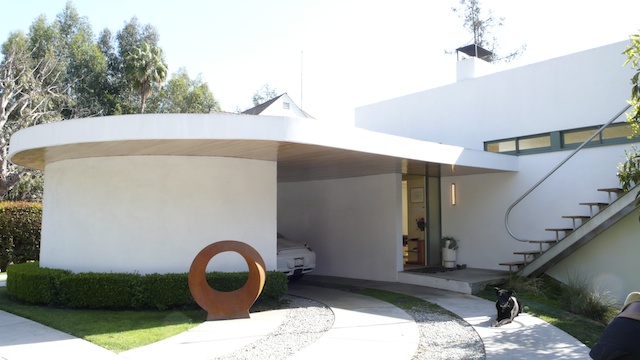 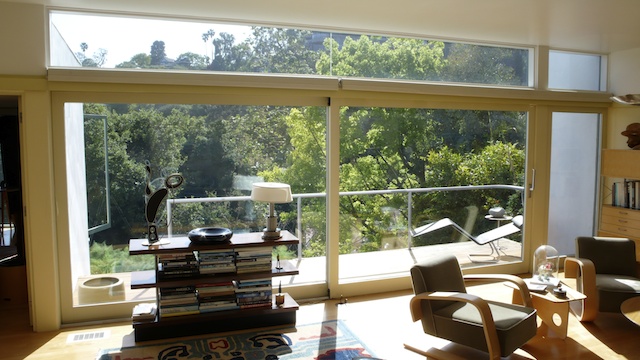 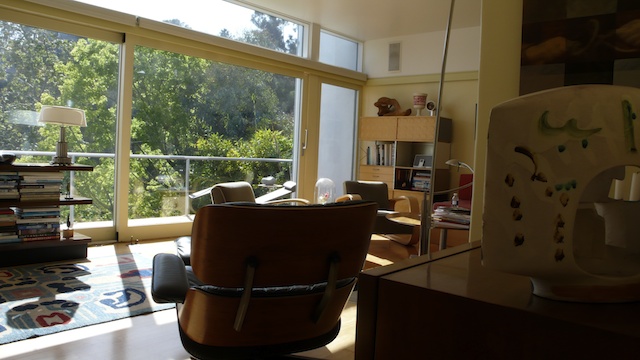 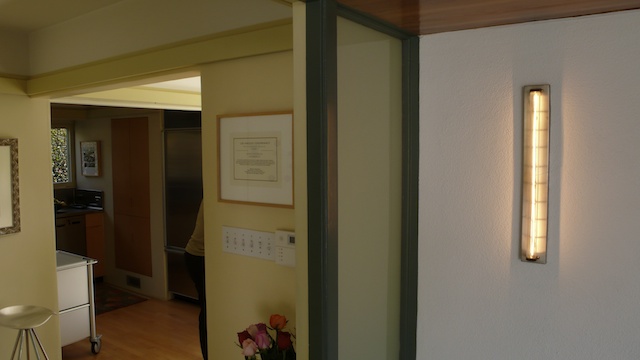 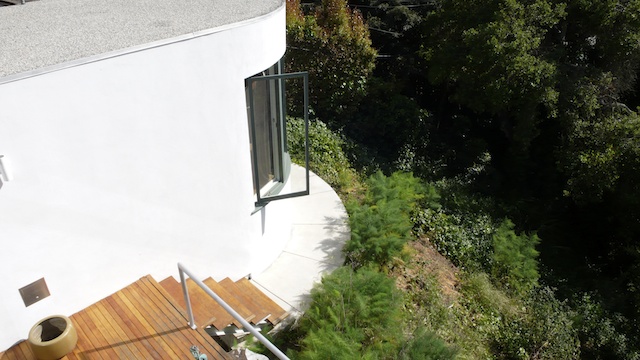 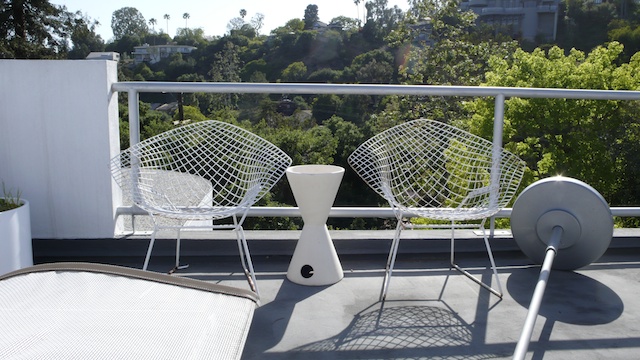 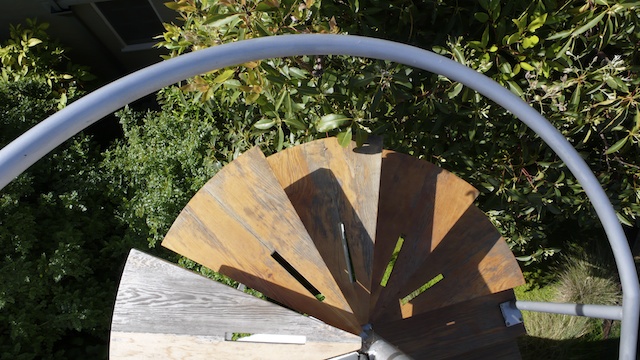 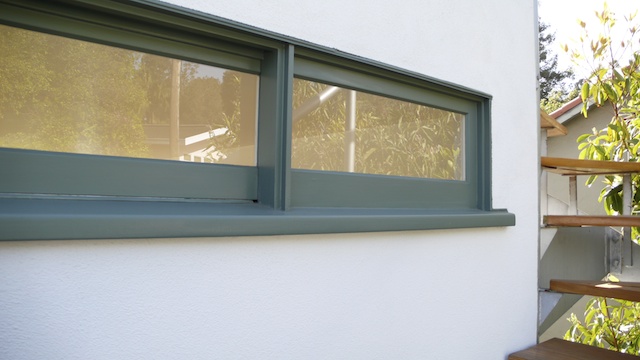 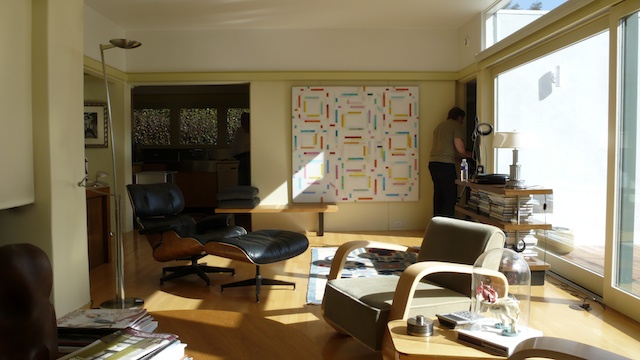 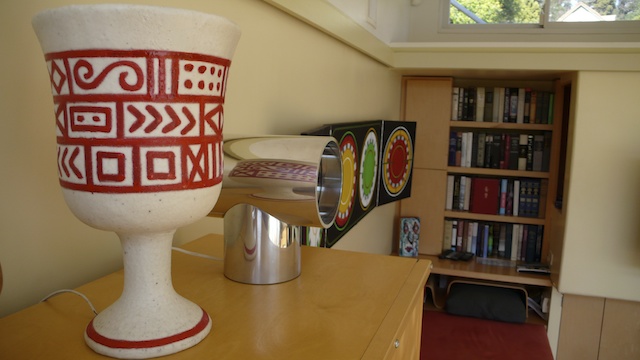 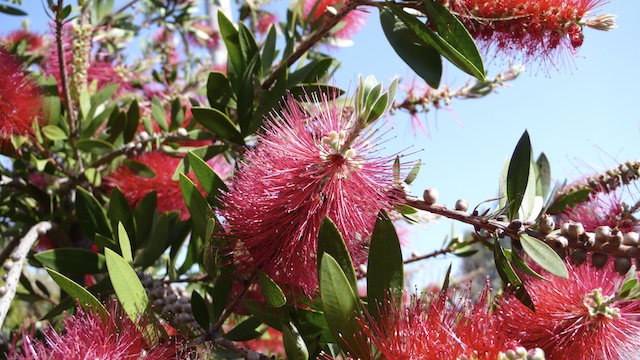 Another one of Harwell Harris’ designs meticulously restored by LA architect Michael Folonis. This house is from 1939. Click here to read more about the restoration work from Michael Folonis.

What can we say about Vancouver modernist Fred Thornton Hollingsworth? The man is a delight and a treasure to us here in British Columbia. You can pick up his book ‘Living Spaces’ online. A great addition for your coffee table. Fred showed us a design he’s working on that he was drawing with a brush! This man is talented and he was so humble. He was more interested in talking about the environment and the state of the world than his architecture. We were in awe of his house which felt so expansive, filled with natural light but weighs in at a meager 900 square feet! Nice work Fred.

Vancouver modernist Barry Downs continues to design west coast magic. Super guy and always a blast to hang out with. Some photos of Barry’s house nestled into the rocks in West Vancouver. More on Barry to come.

What can we say about Dion? Son and partner to Richard Neutra and keeper of the Neutra flame. We’ve been fortunate enough to have spent several sessions with Dion. The man believes in nature and his insight into modernism is truly profound. There is a real connection to the Neutra’s and Vancouver, a connection that we are uncovering. We were able to spend an afternoon with Dion and longtime client and friend Lou Scheimer. More info to come, in the meantime check Dion’s site here.